For a pipeline operator, pigging a pipeline can be one of the most risky and unpredictable operations that might be undertaken. Most pipelines are pigged infrequently and some have never been pigged since construction. Extended periods between pigging operations result in a much higher risk for the pipeline operator due to the unknown condition of the pipeline. In the periods between pigging operations the pipeline may have been subjected to external damage or internal accumulation of deposits may have occurred resulting significant bore restrictions being present.

The most common reason for pigging pipelines is to inspect the line for corrosion using ILI (MFL and Ultrasonic) types of intelligent pig. However, intelligent pigs usually have a limited bore passing capability so it common practice for the pipeline operator to run a pigging program to clean the line and check that there are no restrictions prior to introducing the ILI pigs. However, cleaning and gauging pipelines that have not previously been pigged and with unknown restrictions is in-itself a high-risk operation, particularly on subsea pipelines where the consequences of a stuck pig or a blocked line can be serious.

Engineers faced with the prospect of cleaning and gauging a pipeline usually have very little information on the internal condition of the line and must therefore make decisions based on experience, skill and a large element of guesswork. Typically, a program will therefore start using low risk soft and medium density polyurethane foam pigs to check that there is a route through the line and to push out any loose debris. If the foam pigs come through without significant damage and the quantity of debris pushed out by the pig is minimal, then the engineer will progress to using hard bodied bi-di pigs for more aggressive cleaning and for gauging the line. This stage in the process carries the highest risk for the engineer as the successful passage of a foam pig is no guarantee that a hard body bi-di pig will pass through the line. Foam pigs are very compliant, which allows them to pass through significant restrictions that would cause a bi-di pig to get stuck.

A direct example of this was observed by the author about 10 years ago when working on a project in the Persian Gulf to acid clean a 32” x 100km condensate line which was known to contain Barium Sulphate hard scale deposits. The line had not been previously pigged and it was therefore decided to run a foam pig followed by a gauging pig to establish the minimum bore in the line. The foam pig was launched from the platform and it emerged a day later at the shore terminal with only minor damage. The gauge pig was then launched but it did not appear at the shore terminal as expected. Eventually, the pig did turn up but it was hardly recognisable as the same gauge pig that had been put into the line 48 hours earlier. 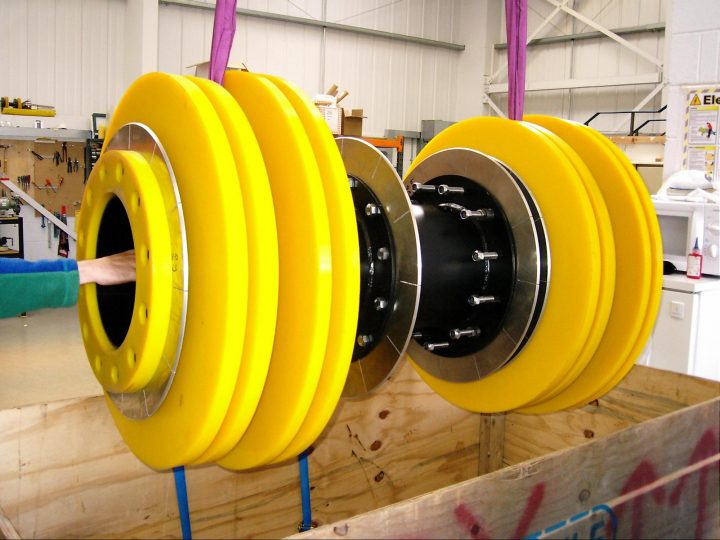 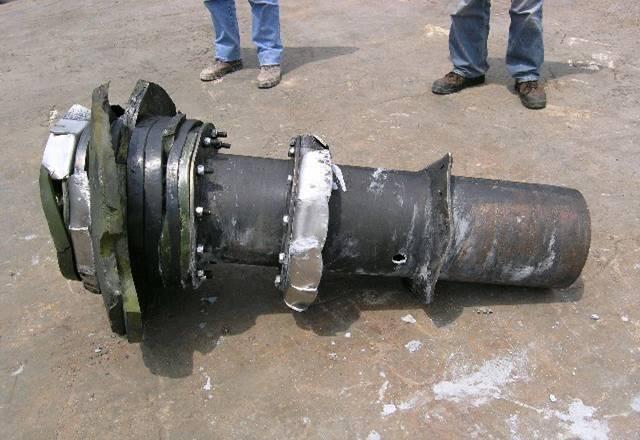 Following this and other admittedly less dramatic experiences, the author became convinced that it should be possible to develop a low risk bore proving tool which the pipeline engineer could run to collect detailed information on the internal profile of a pipeline prior to running hard bodied pigs. This would allow the engineer to make informed decisions on the type and configuration of pigs to be used for cleaning and gauging a pipeline prior to running ILI inspection tools. By using the bore proving pig before running hard bodied pigs, the pipeline operator would benefit from significantly reducing the risks of getting a pig stuck or of getting a blocked line. Also by using the bore proving pig to measure scale, wax and debris deposits in the line at stages during the cleaning operations, the engineer could measure the effectiveness of the cleaning process thus optimising the cleaning program and potentially reducing costs for the pipeline operator.

If the gauging pig indicates that the pipeline has sufficient bore clearance, then increasingly aggressive bi-di cleaning pigs will be run through the line to scrape deposits off the pipe wall and remove any debris. Once again this process is fraught with difficulty for the engineer who will have no information on the thickness of the deposits or how they are distributed along the line. If the cleaning pig used is too aggressive then a large plug of debris may build up in front of the pig to the point where there is insufficient pressure to drive the pig along the line and the pig gets stuck behind the debris plug. An experienced engineer will therefore progress very cautiously through this phase of the work, monitoring the quantity of debris pushed out after each run and only increasing the aggressiveness of the pig in small increments. Inevitably this results in cleaning programs which can take many weeks with large numbers of cleaning pig runs. Frequently, the time, effort and expense put into cleaning a line to prepare for ILI inspection will far outweigh the cost of the ILI inspection itself.

The objective for the development was to produce a bore proving pig which would give the pipeline engineer detailed information on the internal profile of the line. This would allow him to make informed decisions on the type and configuration of pigs to be used for cleaning and gauging a pipeline prior to running ILI inspection tools. By using the bore proving pig before running hard bodied pigs, the pipeline operator would benefit from significantly reducing the risks of getting a pig stuck or of getting a blocked line. Also by using the bore proving pig to measure scale, wax and debris deposits in the line at stages during the cleaning operations, the engineer could measure the effectiveness of the cleaning process thus optimising the cleaning program and potentially reducing costs for the pipeline operator.

Some pipelines, which are known to produce sand or wax deposits, need to be regularly pigged (e.g. weekly or monthly) to maintain flow and prevent the line from becoming blocked. These routine pigging operations tend to be low risk as the pipeline features and the amount of deposits in the line tends to be well known and the pigs used to clean the line are typically simple polyurethane foam pigs which can pass through severe restrictions without being damaged or becoming stuck.

On the other hand, inspection pigs are used infrequently in the lifetime of a pipeline with five or more years passing between uses depending on the local regulations for inspection periods and the commitment of the operator. In addition, many older pipelines were constructed without pig launch and receive facilities and as a result have never been pigged since they were constructed twenty or more years ago. Extended periods between pigging operations result in a much higher risk for the pipeline operator due to the unknown condition of the pipeline. In the periods between pigging operations the pipeline may have been subjected to external damage or internal accumulation of deposits may have occurred resulting significant bore restrictions. In general ILI pigs have a relatively limited bore passing capability and may be damaged or even become stuck if the pipeline conditions have changed. It is common practice therefore for pipeline operators to implement a pigging program to clean and gauge the line prior to running ILI tools to ensure the line is free from bore restrictions which might affect the passage of the ILI tool.

The pig design has been proven through multiple uses of the pig in the pipeline.

Most pipelines are first pigged during the construction phase when foam pigs and hard bodied mandrel pigs are used to clean out debris and to gauge the line to check for mechanical damage and deformation which might have occurred during the pipelaying process. 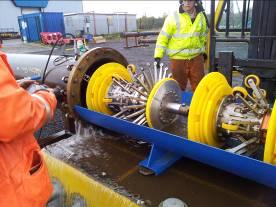 Caliper pigs are commonly used in the oil and gas industry to measure the bore of a pipeline and to identify the characteristics and location of features such as bends, offtakes and valves.   An example of the type of work carried out by PIL is a high profile project recently completed for Petronas in Brazil which involved supply of caliper pigs for inspection of a 24” diameter x 270km long subsea pipeline in water depths of 2300m.

Traditional caliper pigs are mechanically complex and are expensive to build and operate and whilst this type of pig has previously been used for checking pipelines in the water industry, their use is not common.  In recognition of the need for a lower cost simpler type of caliper tool, PIL have developed the Pathfinder® Foam Caliper pig; a new type of pig which uses a unique patented technology to obtain a multi-channel pipe bore and geometry measurement capability in a foam pig body.

The Pathfinder is typically used to prove the bore of a pipeline prior to running hard bodied cleaning or gauging pigs. The Pathfinder will identify and measure any significant dents, buckles or other restrictions in the line such as partially closed valves.

The Pathfinder has also proven to be an ideal tool to use in support of cleaning operations in a pipeline. By running the tool before starting the cleaning program, an accurate assessment of the quantity and distribution of deposits in the line can be obtained. Using this information the pipeline operator can design the most efficient and cost effective cleaning program for the project. Further use of the Pathfinder as the work proceeds allows the operator to modify the program as necessary to optimise the cleaning efficiency. A high bypass version of the Pathfinder has been developed which produces a high velocity jet from the nose of the pig to generate turbulence preventing a build up of deposits in front of the pig 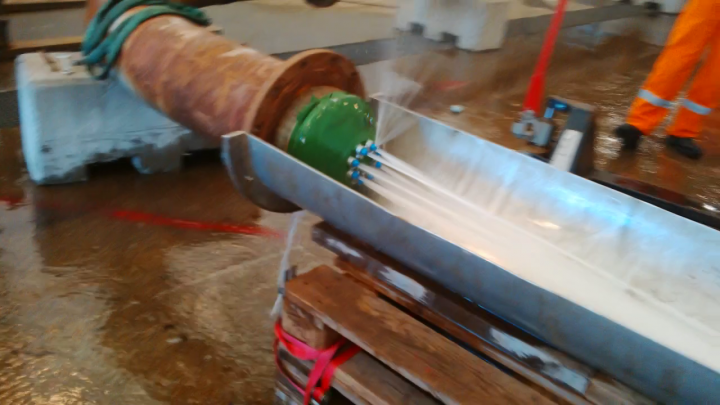 The Pathfinder comprises a medium density polyurethane foam pig with a removable electronics cartridge containing sensors, electronics and batteries located in the centre of the pig. The polyurethane foam material is both tough and yet highly compressible allowing the tool to negotiate severe restrictions in a pipeline with minimal risk of damage or tearing.

Caliper sensors located in the electronics cartridge measure the compression of the foam at multiple points around the circumference of the tool, allowing the tool to identify and measure bore changes. Accelerometer sensors measure the roll (clock position) and the tilt angle of the pig and gyro sensors identify bend direction and angle. An onboard logging system (with real-time clock) collects and stores data from the sensors, allowing pipeline features and anomalies recorded in the data to be referenced to pressure and flow records.

One of the major advantages of using the Pathfinder is that the tool is relatively simple to operate and as it does not normally require the services of a caliper technician, it provides significant cost benefits and operational advantages over conventional caliper tools.

Following download of the data onto a PC or Laptop, the operator transfers the data to the PIL operations base in the UK using an internet file sharing website for assessment by a skilled PIL analyst.  A preliminary report detailing the main features in the pipeline including any anomalies will be issued within 24 hrs and a final report will be issued within 7 days.

Since the first production tools became operational by 2012, the Pathfinder has been used in over 40 pipelines by some of the major oil companies such as BP, Shell and ExxonMobil on pipelines in Europe, North America and SE Asia. The Pathfinder has successfully detected and measured deposits of wax, sand and hard scale deposits in oil and gas lines and has been used as a key element in the planning and execution of cleaning programs. The tool has also been used to identify and locate restrictions in lines where hard bodied pigs have been either damaged or stuck. 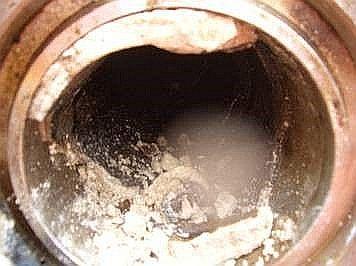