In 2017 PIL were approached regarding supply of caliper pigs for carrying out a baseline geometric survey of three new 6” flowlines due to be installed in the Green Canyon block in the Gulf of Mexico.  The three lines were to be installed from a platform to a subsea PLET in 4200ft (1280m) water depth.

Because the flowlines were to be constructed of thick wall material with an ID of only 4.5” (114mm), the client was concerned about the possibility of the caliper pig becoming stuck in the line.  As a result, PIL suggested the use of the Pathfinder foam caliper in place of the standard caliper as the Pathfinder is a mechanically simpler tool with an ability to pass through much greater restrictions than the standard hard-bodied caliper.  The client agreed to proceed with the use of the Pathfinder subject to proving tests in a flow loop which had been assembled at the PRCI (Pipeline Research Council International) test facility in Houston, Texas.

The test facility comprised a 6” pipe loop modified with a series of pipe spools with IDs from 5.1” (129mm) down to 4.1” (104mm).  Pathfinder pigs were mobilised to the test facility in June 2017. Two sizes of Pathfinder were tested (4.5” OD and 4.75” OD) and each was subjected to multiple passes through the loop. 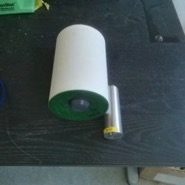 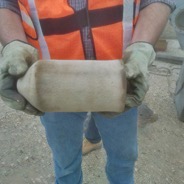 Analysis of the data following the runs showed that the pipe ID measurements made by the Pathfinder were consistent with the actual pipe IDs in the test loop allowing the client to give the go ahead to the Pathfinder project.

Pathfinder pigs were produced and mobilised to Houston in early January 2018 and following a short training session, were handed over to the client for deployment offshore.

The pigs were loaded and launched from pig launchers on each flowline riser and pumped by treated sea water to be received on the respective PLET hub subsea receiver.  The receivers were then recovered by ROV support vessel to the surface where the Pathfinders were unloaded and data downloaded.  The Pathfinder operations were carried out by the client, avoiding the need to deploy Pipeline Innovations technicians offshore.  Data was transferred over the internet to the Pipeline Innovations Ltd base in the UK where analysts processed the data for each line.  Within 24 hrs of the data being received in the UK, the data had been analysed confirming the lines to be free from defects or restrictions and preliminary reports issued giving the all clear to proceed with other pigging activities.